i started this conversation in yesterday's post which you can read HERE.

and i kind of hinted then that i think work is WAY UNDER FOCUSED on in our culture. let me explain (because in some ways it's OVER focused on in that many people find their identity and worth in what they "do for a living." i mean something very different.)

work is under focused on in the sense that people don't talk a lot about finding a job you love/doing work you LOVE and that satisfies. in relation to how much time in our lives we actually spend at work, it is under focused on.
it seems to me that people think like this:
life is all about having fun & enjoying it.
in order to do that i need to make some money.
so i need a job to make a lot of money.
so that i can enjoy life.

BUT the 2 don't mix. it's like 2 separate worlds for most people. i.e. most people seem to RESIGN themselves to the idea that 40-50 hours of their week is going to SUCK. it's gonna be boring and awful and they're simply ENDURING that job in order to enjoy life the other 72 waking hours of the weeks of our lives.

half of our lives almost spent at a job we hate?
OR at a job that is just paying the bills. at a job we don't LOVE.

no way. life is TOO SHORT for that garbage. 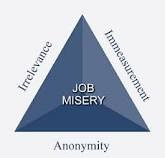 and so i think we can flip his little triangle and the OPPOSITES make for a satisfying and fulfilling job. because i believe people deserve to love their jobs. and it seems that these 3 things are what it takes to make that happen.

2  Measurable - if i can't measure for myself when i'm doing a good job i'll get really frustrated. if no one tells me what measures i'm aiming for and whether or not i'm measuring up then i'll be really frustrated. someone just needs to "clarify the win" and that solves a LOT of job misery issues.

3  Community/Known - all people have a need to be known. in all areas of life. you can't do 40 hours a week at a job without community. lots of peoples' bosses don't even know who they are or anything about them. or the relationship is all work & a dichotomy that doesn't touch the rest of life.

this is getting long again so i'll finish it all out in tomorrow's post with the crux of all this. a real example and calling out some leaders who probably shouldn't be leaders because they are creating miserable jobs for people instead of fulfilling ones!
Posted by patrick mitchell at 7:45 PM