i originally wrote and posted this to renown on September 23, 2010 from Karima, Kenya, Africa. just reposting some thoughts from those days... 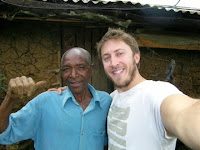 This is Willis Maina. (hence the "whatchu talkin' bout Willis" reference in the title.) Willis is a good friend of mine now here in Karima, Kenya.

He has an awesome home and we hung out at his place together for much of the day on Tuesday.

He spoke fairly good English + i could speak pretty decent Swahili by that time, so we could communicate pretty well. and i can still whip out my trusty iPhone app and type in any word to figure out how to say it. 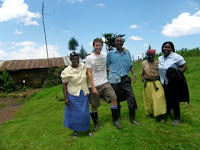 Lucy came with us too (she's Tiffany's good friend and a teacher at the school) and speaks great English so is a great translator.
We hung out with the whole family (except the kids) = Willis, his wife (far left), and his mother (next to Willis). i didn't catch her age, but she is VERY old!

we hung out in the "kitchen" which was a mud hut with a fire in the middle. it was like they were trying to smoke us out of that place! i straight up just couldn't see like half the time. i think someone has a pic somewhere after i came out of there and my eyes look like i've been on drugs for a while. they were just laughing saying - "you can't let the smoke bother you." yeah, well... 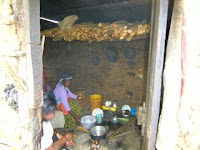 Thankfully, Willis was still finishing up working in his shamba (farm) and asked me to come help him carry his tools in from the farm + he wanted to show me all his land and farm.
this was pretty awesome just getting to walk and talk with him! he had corn fields, and onions, and potatoes. i told him my wife loves potatoes.

He took me to the 2 homes where his children live - also mud walls and mud floors. only 20 feet from the home where he slept. he has 4 children and the youngest is an 8th grader at the Primary school i've been teaching at. she remembered me when she came home for lunch. his oldest is another girl who is married and works at a Kanisa (church) in another area of Kenya. 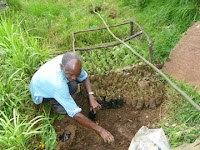 He was growing a ton of Cypress trees too. He showed me one that was like 50 feet tall. then he took me to the ones he was growing that were like 5 inches tall. he taught me how to grow them all in 1 spot & then transplant them to a bigger area when they grow. They have to constantly grow these trees to use for firewood. Fire is a pretty big deal in Karima. you need it for a lot of stuff! 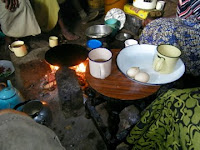 speaking of that, the cool story of the day - when we were all in the kitchen, Lucy was teaching me how to make a fire if you don't have any money for matches. BUT you still have to have some dry leaves and/or hot coals. (it rains everyday in Karima, so dry leaves may be hard to come by.) she said that if you don't have anything to make a fire, you just go to a neighbors home and TAKE fire from them. she emphasized that you NEVER "BORROW" fire because that is TABOO in Karima! and she just left it at that.
* "Why is it taboo to borrow fire?", came the question from the Mzungu...
you would never say you are going to borrow fire, you just take it BECAUSE in Karima they believe every home, every family should have fire... you need it for everything. so, everyone should have it, SO WE SHARE. just come take some of my fire so you can have your own. of course you're not going to borrow it.


WE have a LOT to learn from the people of Karima!
that is some awesome true community and selflessness. 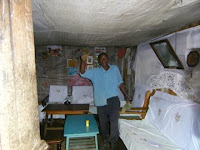 I thought Willis had a pretty sweet crib. looks like a futon.

During our conversation, Willis found out that i love eggs. He has 7 chickens, so he snuck off and then came back and surprised me with an egg! i tried to refuse but he insisted. that was an honor, because an egg is a valuable thing in Karima. he insisted i was his honored guest and i must eat some fried egg!
i had already finished the Chipati and Tea the women made for me. it was all really good. so, they fried the egg and i picked it up and ate it with my hands. best egg i've ever eaten! 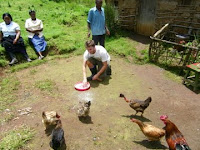 Then Willis brought me outside and said "In Karima we say - 'when you eat an egg you must feed a chicken.' This is because you need the chicken to lay another egg tomorrow to replace the one you just ate, so you better feed it! haha... so i got to feed the chickens too.

FYI - women talk about a lot of stuff around the fire in the kitchen. Willis' wife was talking to me about my wife and how we've been married for 5 years, but don't have any kids, etc... all the women said that NEVER happens in Karima. when someone gets married they have kids 9 months later! every time. i was like "cool". 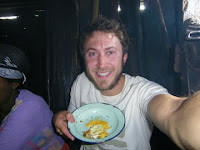 Then she turns to me and says "So you are using contraceptives?" & i was like "uhhhh..." a little bit of shock that i was having this conversation with 4 or 5 African women. we had to talk through that a little bit and then she said "so you are doing Family Planning."
what in the world? Lucy even said she had never heard of it, but this lady had found out about it somehow - read about it somewhere? she finished off the conversation by saying "so you are not Catholic."

well, good eggs and good times with the Willis Maina family at his place in Karima.
Posted by patrick mitchell at 11:20 AM