why do you let it happen?

"Where someone is born should not determine whether they live or die." 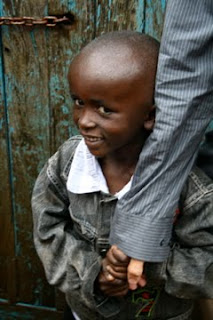 that's something else that's not OK and it's something i think about all the time. the thought was made famous by Bono, but i'm sure someone was saying it before He was.

I think God says something similar daily to US daily... so maybe Bono was just quoting God.

ironically, when serving in a community like Karima, this is something that many of us could tend to say to God. or ask the question = "why did you let them be born in a place that would determine whether they live or die?"
and of course the real question is God asking us "why would YOU let there be places on this earth where that is the case? that's not OK."

Karima is SO FAR off the beaten path.

Tiffany (from our Ridge team) really connected with this lady named Lucy the very 1st day in Karima. She took us to church yesterday. (& she was part of another story i'll have to tell you some time.)
Lucy said that Karima is basically a forgotten village. They are so far out of the way that even the Kenyan government has FORGOTTEN them. that breaks my heart.

Thankfully, Karima is not forgotten by everyone. thankfully some Jesus followers don't think it's OK that they would die of preventable stuff and haven't forgotten the people of Karima.

BUT, i can't even guess at how many other villages in the world are FORGOTTEN... villages that we have never been to and just because someone is born there they will die because they don't have basic needs.

we - our generation - can do something about this.
we can change it.
we can make this quote irrelevant.

and because we can - we must.


"Where someone is born should not determine whether they live or die."
Posted by patrick mitchell at 8:26 AM