my wife's beautiful thoughts on the boston bombing (guest blog)

about a week ago my wife wrote some raw thoughts on the bombing in Boston. it was basically her reaction to the general public's reaction as reflected by the media.
i love my wife always, but when she writes things like this it makes my heart skip a few beats because our hearts are in rhythm. Our 2 hearts are in sync when it comes to loving all people because God loves all people.
It makes me so proud to be married to a woman whose heart comes out like this. i love her transparency and raw honesty and she and i feel very much the same way. She just wrote about it in a nicer and more beautiful way then i would have... hence i'm posting what she wrote below instead of writing myself. (the emphasis in her piece is mine) 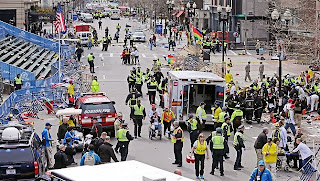 "As I watch the unfolding coverage on the Boston bombings I am heartbroken.
I am of course incredibly saddened for those injured & the families of those killed. I have felt nervous for those living in the area who have been on lock down all day with the suspect at large in their community.

I am completely taken aback by the comments that I have heard about these 2 suspects. By no means am I justifying their actions or belittling the situation.


What has repeatedly come to mind throughout this whole thing is that God created these brothers & God loves them.

I know the natural human response is extreme anger & wanting revenge. I feel some of that too, but it makes me sick to my stomach to hear some of what is being said about them.

I have seen or heard comments such as "thankfully hell has a new member tonight & we hope it adds another very soon", "we are so happy that this man is dead." Those are pretty cruel & harsh statements!

I just don't think that someone dying or being in hell (if that's where he is) is something to be happy about.

The fact is that God loves this suspect just as much as he loves you or me & that God would forgive this man if asked.

That's a hard pill to swallow & I'm not sure that I can wrap my head around that right now. What I do know is that I am thankful for safety. I am thankful for police, FBI agents, healthcare workers who have worked so hard throughout this whole ordeal. I know that I am happy that the situation seems to be over. I hope that the city of Boston will be able to rest easier tonight. I hope that you will join me in praying for the people of Boston as they start to move forward & try to recover from this attack. I hope that I will be able to get past the anger & the desire for "justice" that I am currently feeling & get to a place where I can pray not only for the victims, but also for the suspect."

- Crystal Mitchell
Posted by patrick mitchell at 9:20 AM