you need the glasses, man

One of my best friends wrote this recently literally while sitting in his car in a traffic line. He and I talk about everything - whatever thoughts cross through our brains. So he wrote this and shot it to me.
i loved it and asked if i could post it as a guest blog. so here it goes, from the amazing brain and heart of my blood brother, Ed Williams... his thoughts on John 1:37 and the narrative surrounding it as the apostles decide to up and follow Jesus when he poses the offer...

Here are these men who, upon meeting Jesus, get up and leave their jobs and homes and begin to follow Him. Did they know they wouldn't be coming back? Did they leave all of their possessions? Did they even have any or much? How much does a middle eastern fisherman make?  A  Jewish, Roman-tax collector has to make a pretty good living.
I think it had to do with how, suddenly, the fog of the day in-day out blew away. They saw clearly that life was about MORE. And that MORE had just walked by in a pair of sandals. That MORE was their key to God and greater contentment and purpose than dragging nets and collecting money and things. They felt alive, invigorated in the idea that they had finally found something that mattered, something that made their previous worries and concerns trivial... something that gave their short existence here purpose. 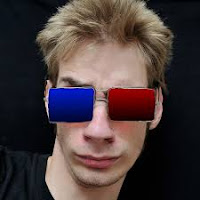 It makes me think that people who live their life without God are like people who bought tickets to one of the first 3-D movies.  They only know a tiny little bit about the movie. They've read about it and the reviews are mixed.  As they walk in AND throughout the film, people say to them, "oh, you didn't get your glasses.  Here put these on." But the people refuse. They're not going to put something on their faces during a movie.  "I see just fine! I've seen movies before, I don't need glasses to watch a movie."  "But your missing the whole point!" say those with the glasses.
At the end,  people RAVE about it while others say it isn't that good and they don't get what the big deal was...they didn't see the same stuff that the other people saw and sometimes wonder if they saw the same movie. "It wasn't as good as as I thought it would be. There were some cool parts, don't get me wrong... but the whole thing... it just seemed a little fuzzy the whole time."

as long as he keeps scribbling on his iPad in the traffic line at school, i'll probably keep having some awesome guest blogs to post.
Posted by patrick mitchell at 11:00 AM