our journey with the plan (part 2)

This is the rest of the story on how we became debt free and in a ridiculously good financial spot without making much money. (You can read part 1 HERE.)

Continuing from yesterday... we had paid off a lot of debt in 08, but Dave says that if your 2nd mortgage is under a certain percentage of your household income then you should include it in your debt snowball. Ours was basically right on the border and probably could have gone either way. 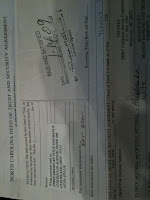 It was tempting to just shout “We’re debt free!” after paying off Crystal’s car, but I was like “Ya know what, let’s just knock this mortgage out, be done with it & REALLY have something to celebrate.”

By the time we had paid all the other debts off we really had a CHUNK of change every month that used to be dedicated to payments that was now a massive SNOWMAN size snowball! It all went straight to principal to pay off this $20K mortgage. Every month we were throwing well over a grand at that thing. (we got out of paying over $2K in interest that half of the year!)

A couple days before Christmas of 2008 Crystal and I sat down together and PAID the final payoff online to BB&T for our mortgage. We were debt free! I shouted and had a little party right there on the couch. (That Christmas just felt different too by the way.)

That's the final piece of paper on our mortgage showing it was PAID IN FULL. that was awesome! 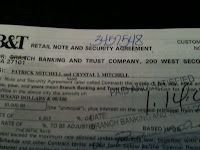 We started in December 07 and were debt free in December 08. It took us about 13 months to pay off around $31,000! That’s what I’m talkin’ about.
And trust me… we weren’t making very much coin either. It was just focused intensity.
All glory to God. Definitely not our power… just His favor. I believe He hates debt, so we just got after it.

Next step = January 09 we began Baby Step #3 -> Finish the Emergency Fund (and kick Murphy all the way out!) Dave says to put 3-6 months of expenses away into a readily accessible account. The more “unstable” your income is, the closer to 6 months you should save. We went with the 6 months & it’s an amount that wouldn’t force us to change our lives much in those 6 months. it would probably last us more like 9 months.

We finished that off in November of 09. Then in December my wife got a little "reward" for being such a great sport with a phat shopping spree because of all the freed up money.

*Then the realization hit = We could both lose our jobs and not change a thing or have a worry for 6 months! That is what i call security! That's 6 months to hit the job trail hard, getting PT work & not having to go back into debt! Plus it's enough money to cover us if a major disaster hit.

So, January 2010 we started the next phase. Baby Steps #4, 5, & 6 all come at the same time!
#4 = 15% of our total income now goes straight into retirement. Crystal has a matching 401k which we max out & that is so awesome (it's straight up free money!)
Then we hooked up with a Dave Ramsey ELP here in Charlotte who is gonna help us up & hook us up with Roth IRAs to max out & then a little more in the 401k to finish off the 15%
*It feels so good to get started on this! My whole life i've heard about how important it is to get started investing early! just because of this monthly 15% we will literally retire with many many millions. dang. crazy.

#5 = saving for our kids' college tuitions. Dave's got a sweet way to figure out what it will cost when our kids are off to college. we have none yet so we technically can't open ESAs for them, but we went ahead and started putting away a lot per month. they can go to Harvard or Princeton if they want (& if they're smart like their mom.)

#6 = PAYING OFF OUR MORTGAGE! this one will take a bit longer, but worst case scenario we should have it paid off by the time we're 31 or so. not too much longer. just trying to pay as much extra as we can toward the principal! (In this economy i'm actually trying to cheat the system & sell our house & just rent something or buy a foreclosure at half price and be totally out of debt including the house! if the right opportunity rolls along i am all over it!)

that's our story & where we're at now. it's been a blessing. the crazy part is we still don't make much money, but we've been able to GIVE way more than we ever have in our lives - to our Church, to God's Mission globally, to the poor, etc... crazy how that works.
& God has been the only reason this has all gone down this way. amazing.

BOTTOM LINE = i am an idiot and this worked out for us... therefore ANYBODY can work this plan, get out of debt & be financially secure.
we get none of the credit. we only tried to screw it up.

*i'll share some more thoughts on our journey this weekend.
Posted by patrick mitchell at 3:52 PM

bro, you are my hero. if i had half the "gazelle"ness you did, i'd be a millionare. you continue to inspire me day after day.