the prequel to the plan

I mentioned in my post on Sunday that my wife and i might live a little "different" when it comes to finances, but it's all because we're sticking with a plan. I'm going to write a little more about that in the next week or so. 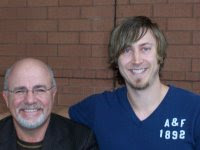 it's simply a "Total Money Makeover" and we learned about it from Dave Ramsey. We had never heard of the guy until we heard him speak back in '07... now peeps call me a "Ramseyite".

I was not a genius and I am not very organized at all and I didn't know jack about money (other than that i didn't have any!)... I had tried a couple different money systems, but i wasn't smart enough i guess.

But, Dave's plan feels to me like "money for dummies". it's the simplest thing ever. We just have to follow the plan and we're golden. & the plan only has 7 steps. you just take 1 step at a time. that's my kind of $ plan. perfect for a dummy like me!

I'll write about those 7 steps tomorrow, but for now here's all you really need to know and do before starting the 7 steps.
1) no credit cards - ever! cut them up. NEVER be in debt or use debt again.
2) budget every dollar! we started doing a budget where we spent every single penny on paper before the month began. we're still doing that.

Like Dave says, if you want to be normal (spelled BROKE) just live like everyone else. But this plan is about "living like no one else so later you can live like no one else."
Posted by patrick mitchell at 11:59 PM