most people are actors.

we've been given a script by our culture, or our job, or our religious or political affiliation (or all of those things) & we simply memorize the lines & ACT.

but so not cool for a human in life.

in fact it's great for an actor. that's what makes a great actor & a great movie.
but it makes for a really bad life.

i see a lot of Christians doing this for sure. & that's a bummer.
it's a bummer because when we become actors we just memorize the lines & follow the script. it looks good.
if you're a really good actor it looks REALLY GOOD.

but it is detached from the heart. from who YOU really are. again, not very genuine.

the only people who DON'T get caught up in this are CHILDREN.

because children don't really know a thing about acting.
they haven't yet learned to create an impression that's not really there.


whatever is in their heart is what you see.

whether it's good or bad, for better or worse, what is in their heart is what they live out.

most adults are incapable of that because we're following the script. we're actors.

*Keira, for example, moves through every second of every day completely ENGROSSED in that moment! it's unbelievable.
there is no script she is following, she is just flinging herself at the adventure of life, head first. 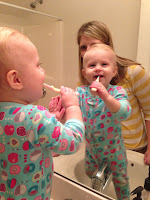 **For example, watch a child laugh some time. seriously. pay attention. it has never crossed their mind what they look like, sound like, or appear like to others as they are laughing.
they are simply... laughing.
that is they are completely immersed in the moment. full enjoyment.
and not just laughing - watch a child having any sort of fun. they are abandoned to the fun... to the moment. nothing else. no one else's opinion of them matters. they are LIVING their life.

that's how Keira does it anyway, & i think that's how all children do. until we teach them otherwise.

i want to learn how to do this again from my daughter. and then help her never lose that as she grows up and starts rubbing shoulders with all the other actors & screen writers out in culture.

no one has given my daughter "the lines" yet. she has no preconceived ideas yet about how to "do life." no template from culture, peers, christianity, etc...

Children only know one way to be.

children don't know how to ACT interested, or curious, or nice, or sympathetic, or pious, smart, or any other thing.
they simply ARE or they AREN'T.

you feel me? trackin' with what i'm sayin?
children aren't really conscious of the fact that they could be coming across in a certain "negative" way (ignorant, selfish, etc...)

of course, it's not really practical for us to all drop our scripts & costumes & truly be ourselves, right? right?...

i do think that it is the SCRIPT, the lines, the ACT that is so so dangerous when it comes to whatever style of spirituality you embrace.
because at that point, YOU aren't actually involved anymore. you're just an actor playing some other guy who is a little more humble and a little more religious than you.

& it's really hard to follow Jesus if you aren't the one following.
Posted by patrick mitchell at 1:43 PM