i originally wrote & posted this to renown September 18, 2010. just revisiting some of our time in Kenya...

[i’m thinking about only trying to tell 1 main story per day even though i have like 50… we’ll see how well i stick to that.] Today's will mainly focus on my new good friend John.
[if you are friends with Crystal on Facebook you can see her awesome recap of the day. better job than i would do of recapping... even though i also may post a recap at some point.] 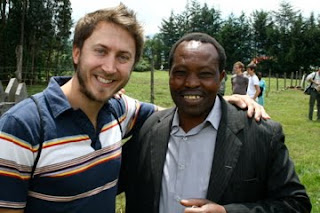 When we arrived in Karima this morning we danced for a while in the clearing where the brand new well is. that's when i met John.
i hung out with John and he taught me the dances and the words to the songs. You know how when we’re singing a song we rock an AIR GUITAR? well, these peeps in Kenya rock the AIR ACCORDION instead. seriously.
Then John taught me the exact moment when to yell "WHOOOO!" each time during one song & dance, so we became fast friends.
I hung out with John most of the day. Our whole team from Ridge/410 Bridge walked about 1 mile down the one road through Karima. The people pointed out their homes and farms to us + the 5 churches in the village. (pics to come later - maybe when we get home?)

I just walked and talked with John the whole time. He has lived in Karima since 1963 (must have been young at the time because he doesn't look very old to me). He is now the chairman of the village council for Karima. That's a pretty big job.

Karima has BEAUTIFUL mountains all around it. the temperature is perfect and it is just a straight up beautiful place to be. i told John that and asked if he ever climbed them. He told me about going to the top of the mountains in 1978 and the experience he had.
John has a son named Patrick! how cool is that? he is 30 years old and getting married next month.

We talked for a long time and then John took us to 3 of the 4 water tanks throughout the village and the brand new clean water well that Karima has now! MZURI! he explained to me how the whole thing works.

as we were walking to one of these water tanks I asked John how the people got drinking water before this well. He said "we would just collect it from the rain or walk to the river." and almost indignant i responded - "but that water isn't clean, right? that makes you very sick..."

it was the way he said it that jacked me up. i was already jacked that these people have been drinking dirty water all their lives - because that's all they have access to... AND they are dying from it!
BUT - he said "yes, i know" and it was as if he were saying "that's just life. that's normal. that's all we've ever known. we need water or we die. but when we drink the water... we die." there was nothing abnormal about this for him... like it was almost "OK".

THAT'S NOT OK! there is no freaking way that this should be happening. it jacks me up so much.
for some reason, most of the "rich" in our world live like it is OK. (i want to write a lot more about it but every time i think about this all day long i get so passionate that i just tear up, well up, choke up... so, maybe some other time i'll dive in more intensely.) 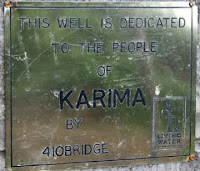 Thankfully - 410 Bridge & Living Water International (another awesome org. i've written a lot about via Advent Conspiracy etc...) teamed up to make sure these 4,000 people have clean water. The well & water are working and good to go as of this month! + hopefully this week they'll get the electricity to send the water down the pipes to the "areas" where the homes are.

Check out this SHORT (20 second) video of John talking about life in Karima before & after this clean water! (i lowered the quality because the HD video would take up all my MB, but i will post the full version later. sorry for the other loud voices in the background... just try to listen to John.)

i shot a video of a community leader in Karima pointing out the graves of two people he knew who died before they got clean water. i personally don't think that should be happening ANYWHERE in our world today. Thankfully in Karima, it doesn't have to anymore. 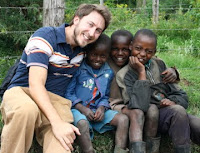 This is Danson (on the far right). i met him today. he's 6 years old and see if you can check out the logo on his sweatshirt. He is rocking a CHARLOTTE HORNETS sweatshirt! i tried to explain to him that that's where i lived and that was the team that used to be in our city, etc... but i'm pretty sure he didn't get it. (i have other thoughts on this incident from a 30K foot view, but more on that later.)

i also met Richard today. i could tell right away that Richard is a really smart kid. he's 9 years old & as you can see has an awesome smile. he loves playing soccer (kandanda), so we hit it off. we already plan to play some kandanda together later on this week.

*Here's what i get excited about:
Richard and Danson were born in Karima and will probably live the rest of their lives in Karima. They will grow up and live the rest of their lives always having CLEAN WATER! For my friend John, he only knew dirty water. but now for Danson and Richard, it's a new era.
Their children will never even know what it's like to drink water that kills instead of water that gives life.

but God, the God who gives water... and life... and satisfaction... and salvation... and joy...
is being worshipped in Karima today. John and I worshipped God together today and celebrated His renown in a tiny little village in some mountains of Kenya.

Posted by patrick mitchell at 8:43 PM