is there room for more than 1 Fuhrer?

to choose to be a part of "The Way" in the 1st century was no joke. we don't really have a concept for what how crazy rebellious it would be to have been a Jesus follower in that 1st century.

about a year ago i read an awesome story that i think partially captures the feel and emotions of what it would mean to spout “Jesus is Lord” in the 1st Century Roman Empire: 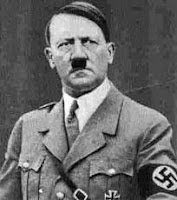 “Imagine it is the late 1930s and you are in a lavish hotel in Berlin for a sumptuous dinner with a cohort of German industrialists, bankers, barons, university lecturers and officers from a German SS Panzer division. The evening is relatively cheerful and the mood jovial; conversation revolves around the weather, advice on financial investments, holiday plans in Austria and the latest operas. Then an SS officer taps his glass and proposes a toast to the Fuhrer, Adolf Hitler, to his health and the new Germany, and everyone raises their glasses. And then you, being the committed Christian you are, propose another toast and bellow out in your best German, ‘Jesus ist Fuhrer!’ Now what manner of reaction do you suppose it would prompt from those SS officers? Do you think they would even entertain the idea that Germany has room for 2 Fuhrers, the other being a Jew?”

wow. hopefully that hits home like it did for me.

and over the past year it has prompted MANY more thoughts. hopefully i'll get to write about them and flesh them out.

mainly... that we in the West and yes, in America are in a similar situation in many ways.

there is still only room for one Lord. one King in this culture.

it's just that for most Christians that "fuhrer" is certainly not Jesus.

because that would require us to, in essence, stand up in the middle of our version of that German dinner and declare something with our lives that is so counter-cultural... so anti-everything socially acceptable & dare i say... American... (as it would have been anti-German)

that may be too far to go for most.

& so we settle back into our nice, neat, socially acceptable lives.

i'm sure that will change the world.


(thanks to scholar Michael Bird for the fictitious German analogy)
Posted by patrick mitchell at 5:48 PM