soweto (my trip to the slum)

on Sunday Elias and i walked into Soweto. it's really only "1-2 blocks" from the orphanage. it's all relative in Kenya though. you just have to walk around the big pond - which is the sewage/waste hole for the area. it's big. 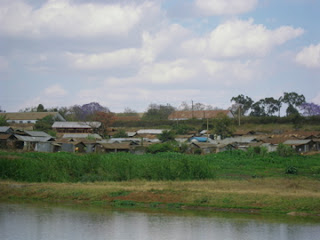 Soweto is the slum in the area where Havilla (Children's Home) is. if you don't know what a slum in Kenya is you can just google it.
Crystal and i were planning to try to visit Kibera - one of the largest slums in Africa, but all the Kenyans said we would need an armed police escort to visit. There are over 1 million people who live in Kibera which is in Nairobi. 3 million in the whole city of Nairobi and Kibera is just a tiny slum (according to the land space) with a million people crammed into it.

Walking around Soweto for a couple hours was absolutely... wow. i don't even have the words for it. i guess i would call it heartbreaking. very humbling. something in my heart started to cry out - a need to do something. anything.

this place - Soweto - is TINY, but around 10,000 people live there! TONS of kids. mostly orphans. the rest living with only a mother or grandmother.

You could constantly hear all the little children's voices chattering "Mzungu! Mzungu!" as i walked through the streets. 1 by 1 they would run up and grab my hand and say the famous English phrase that they all know "How are you?"

Soweto was a whole town. a whole city right there in this very very small land space. stores, shops, homes... the quality of which most of us wouldn't want to even set foot in.


this place is the epitome of poverty.

it's like what they put on TV. it's the extreme that comes to your mind when you think of people living in absolute poverty. 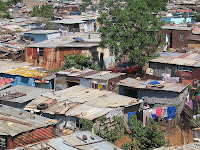 the smell was almost unbearable - almost knocked me down every few steps... and TRUST ME, i have gotten used to some very bad smells over the past month. cow manure, bodily odors, etc... are nothing and don't even phase me. but this place was bad.
kids barely had clothes. trash and literal crap was all over the streets, like a foot deep in some places.

only the sewage pool separates this slum from Havilla - the orphanage Crystal and i have been living at. we see Soweto every day - can't be more than a 100 yard walk away.

wow. what a difference a short walk makes because the orphans at Havilla are worlds apart. the 3 story orphanage is no Hilton hotel... or even a crappy college dorm, but compared to the slum where these kids would have ended up... it's an amazing blessing.
most of the kids in Soweto probably don't even get to go to school because there's not a chance anyone can afford the school fees... even for public school. Thanks to the support of some generous sponsors (through Bright Point - something similar to Compassion International) ALL the kids at Havilla have their basic needs taken care of AND they get to go to the BEST school in the area!

the kids who live at Havilla are full of dreams. they eat 3 balanced meals every day and drink clean water. they have a bed to sleep in every night. they work hard farming and work hard on their school work. they hear how much God loves them and that He has great plans for them. i am so thankful that these 47 kids are at Havilla.

i also think it's flipping awesome that Joseph (the Children's Home director) made the trek over to the Soweto slum recently with a camera. he walked through and interviewed A LOT of kids and their families/guardians. he took their pics and posted them to the Havilla Foundation site to try and help these kids get sponsored! so that they can go to school and have a future.

maybe one day the gap between Havilla and Soweto won't be quite so big.
maybe one day only the sewage pond will separate the 2.

that's my hope.
Posted by patrick mitchell at 12:00 PM