Yep, it's time for the next guest blog & today I'm introducing the next (& probably final for a little while) Guest Blogger... One of my really great friends, Caleb Jones. 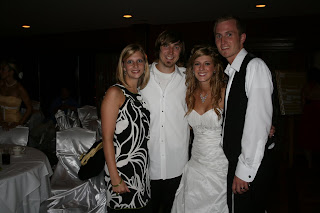 Caleb has been a great friend of mine since college. Actually he lived in that same SWEET beat up trailer for a while that an earlier guest blogger (Kris Hassanpour) lived in. You can catch up on that story about the trailer park HERE.

I think I first met Caleb when I recruited him Freshman year and he rode with me in my famous Caddy to a network marketing meeting at like Golden Coral or something. I think he didn't join in because the guy I took him to talk to had a nasty mullet. He figured that was unprofessional. (Little did he know that guy was making $20K a month in the business & I ended up paying for my whole college doing it... but whatever.)

Caleb and I have stayed good friends through the years & still hook up often in Charlotte or Detroit (his hometown). In fact, Caleb & his just-over-1-year-bride were at our house just a couple weeks ago!

*Actually, to the right is a picture of Caleb when I asked him to be a guest blogger here on renown. He was so moved and honored and touched that he just broke down and cried uncontrollably.

I was honored to be a groomsman in Caleb & Erin's wedding last year. Great couple and great friends of ours.

Caleb says what's on his mind. He says what's on his heart. Thankfully he never learned to be politically correct or talk "like a pastor should." But whenever we get together you can guarantee that there's gonna be some late nights & some peeps doubled over in laughter.

*Be sure to check out his article that I'll post tomorrow!
Posted by patrick mitchell at 11:56 PM