Dave Ramsey is definitely one of my heroes! He has completely revolutionized me & crystal's lives! He is a financial genius and we are following his philosophy of money. I'm pretty much a nerd because I Tivo his show on Fox Business Channel every day for the past 9 months and watch it constantly. I can pretty much quote everything he says. I'm a Dave Ramsey junkie. But I won't go too far down that road because I will write a BIG post within the next 2 months all about Dave & his total money makeover & what it's done for us. 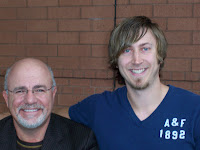 All that to say that when I got to meet Dave briefly at Catalyst this year... It was pretty awesome! I briefly told him our story of getting out of debt. Pretty cool to meet someone who has completely changed your life.
**When his team heard some of my story they grabbed me to be in a "Dave Ramsey commercial" that they actually played in the arena the 2nd morning of Catalyst! (I actually missed it because we decided to sleep in! But I saw it later. If I ever find it on Youtube I'll post it on here.)
Anyway, all I really wanted to do with this post is write about my takeaways from his talk which had everything to do with leadership and unity and nothing to do with $... (go figure)
(Catch up on my posting of Catalyst talks HERE)
The Enemies of Unity ("Unity is a spiritual happening.")
-  Few churches or organizations experience real Unity. Most organizations DO NOT work to their full potential because there is no unity!
*Unity creates the possibility for synergy!*
- The 5 Main Enemies of Unity -> **To the extent we fight back these enemies we will have success in our organizations!
1 Poor Communication = when this happens in any form, strife sets in!
2 Gossip (he fires peeps for this... pretty cool) = it is degrading & will DESTROY a church or organization. *"If you're talking to someone who CAN'T fix it, THAT'S GOSSIP!"
*"A successful leader MUST develop & maintain a culture where negatives are handed up and positives are handed down."
3 Unresolved Disagreements = these happen when the leader is clueless or when he avoids confrontation! a Leader by definition must have a BACKBONE! [awesome quote] = "Sometimes in the name of being 'Christian' we avoid confrontation. That's not nice it's WIMPY!" haha :) very true.
A little confrontation CLEANSES THE WOUND and allows everyone to go forward in a spirit of unity! (the Leader must lead in the confrontation.)
**"When you are aware there are hurt feelings and/or disagreements, act quickly and decisively!"
- 2 GREAT quotes coming up... remember them! = "An indecisive leader is not a leader. That's squirrel theology. Leaders make a CALL." [haha, get it?... "squirrel theology"!] + "Nobody ever killed anything by saying 'Ready, Aim, Aim, Aim, Aim, Aim, Aim, Aim...'"
4 Lack of shared Purpose = this happens when the leader doesn't restate the GOAL, VISION, and MISSION early & often.
5 Sanctioned Incompetence = remember we're ALL incompetent at something so that's not a bad thing. BUT, sanctioned incompetence demoralizes.
"Team members will eventually become demotivated when someone else on the team can't or won't do their job and a leader won't take action (because they all know they're working for a wimp)."
***[we resonate so much with Dave's statements @ Ridge church. especially this one...] = "There's 1 way to penetrate the marketplace = extreme excellence!
*So, the leader must go to battle early & often with these enemies FOR THE SAKE of UNITY!
"When unity is valued in the culture, the whole team will also act to keep these enemies from the gate."
Wow. good stuff Dave. thanks for that. They made him talk about $ after that because it was the beginning of the "economic meltdown."
***I am flipping proud to work on a staff team that embraces unity and puts the beatdown on these 5 enemies! I never want to work in a place that doesn't line up with that again!
Posted by patrick mitchell at 10:42 AM

Oh man! I wanted to go to Catalyst so bad this year. It wasn't in the cards at all. We are in the middle of our Total Money Makeover.

I'm a huge Dave Ramsey fan as well. Three of his staff members were at our home a week or so ago. I did a post about it over at my blog www.jimmyshouse.com.

Anyway, thanks for listing his points on Unity. That was very insightful.

I'm a fellow Dave fan from Ohio. Thanks for the post - great stuff! It will be most helpful for the business I'm in.

no problem. glad this could help someone!