what you do IS what you believe! (sort of part 2)

Again, many Christians put too much stock in "doctrinal statements" and having the right theology. It's like if you can just "mentally assent" to this list of statements then it's all good and you're an orthodox Christian. I think it's important for sure, but we can say we believe that stuff all we want... but if we don't live it we don't TRULY believe it!

What you do IS what you believe! 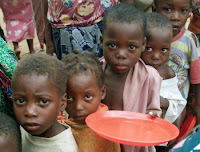 For example = I can write on this blog all the time about how much I believe God wants us to love and care for the poor and orphans. I can put it in my doctrinal statement. I can quote all the Bible verses about God loving the poor and commanding us to love the poor (like "Those who shut their ears to the cry of the poor will also cry out and not be answered." = Proverbs 21:13 and "Those who give to the poor will lack nothing, but those who close their eyes to them receive many curses." = Proverbs 28:27 and 14:31 and 28:8 and 19:17 and 22:9 and 29:7 and on & on). I can sit and debate people for hours and convince them that God commands us to care for the poor. I could be really smart & know all the biblical teaching there is to know about this topic! BUT if I didn't love and care for the poor myself, not only would I be an idiot, but I would also prove that I DON'T REALLY BELIEVE GOD WANTS ME TO LOVE THE POOR! Because if I really believed it, I would DO it.
Because what you do IS what you believe!

In "do you think Jesus really cares if you..." which was "sort of part 1" (which you can read HERE) a lot of people brought James 2 into the discussion... and rightly so, although that specific passage never crossed my mind when I was writing that post. You can read their thoughts on that passage HERE.
Speaking of James 2, I do love the verse (19) in that passage that says "You believe that there is one God. Good! Even the demons believe that." haha, and I'm sure that God is very impressed with their orthodoxy!

Anyway, all the talk in the comments about James 2 made me nostalgic. I remembered the guy I used to listen to way back in the day named Rich Mullins... anybody remember him? He was different. kind of a "ragamuffin." That guy wrote some good songs. I wish he were still here and still writing.
So, there was this song I used to love to listen to by him (based on James 2). It actually didn't even have any instruments in the song. Just voices. It was kind of a goofy song honestly. but I liked it. It was called Screen Door "Faith without works is like a song you can't sing; it's about as useless as a screen door on a submarine." = Straight up worthless.

(YOUR thoughts?)
Posted by patrick mitchell at 9:47 AM

I get it. Thanks Patrick. Now to the doing...

Bro, I love your thoughts in this blog. I think this one sums up a lot of things that people didn't understand in the first blog.

I have been teaching through the book of James and when I came to that passage in chapter 2 it really made me think about what I say I believe and what I really believe.

I think you are right on when say that we can have a great doctrinal statement but unless our actions follow up that statement than it is worthless and we don't really believe it.

This should really cause us to think about what we say we believe is truth. If we can't find action in our life to follow up on that truth it is dead!