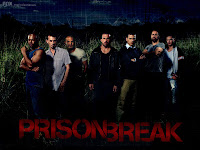 so, i only watch 2 shows - 24 & Prison Break. & maybe that will
turn into 3 as the jury is still out on
OH yes, I don't watch much TV. really only 2 shows & now a possible 3rd. But I am completely enthralled by those 2. they are like the best 2 ever. 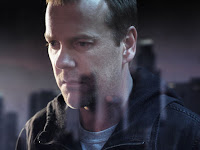 I believe that 24 is the greatest TV show EVER MADE!!! (Of course, all due respect to Friends which is also the greatest tv show ever made - & no that's not contradictory, they're just so different that you can't really compare them. they're both the greatest.) Yeah, my blood pressure rises to an unhealthy level when I watch 24. It really bugs my wife, I think. she's also an avid 24 addict but she doesn't let it jack her up like it does me. she says, "Patrick, it's just a TV show. Chill out." But, it's just SO intense! it's CRAZY intense like you wouldn't believe. surely you watch it... right? we have the seasons on DVD if you want to borrow them. i dare you to start... you won't be able to stop! guaranteed.
*I have only ever wanted to "BE" 3 people ever in my whole life. You know, like your hero, your idol. The person you wished you could BE as a kid.

Well, my 1st started when I was maybe 7-8 until about 12. ***I wanted to be John McClane. (Not Bruce Willis mind you, but John McClane.) 7 or 8 is when I saw the 1st Die Hard with my Dad & I became a man. You know, it's like a rite of passage or something in American culture. John McClane was a freaking pimp & no one could stop him & he was always bloody & said stuff like "Yipee Ki Yay" & stuff. So, in my childhood I wanted to "BE" John McClane.
Then when I was a teenager I wanted to be Chandler Bing! He was the funniest guy in the world. I think that's maybe where I developed my sarcasm... from junior high sarcasm 101 with Chandler Bing. He had the life too - just chillin' in that recliner all day with Joey watching TV. I never missed an episode from 7th - 12th grade.
Now, in my 20s... I want to be JACK BAUER!!! THAT guy is a PIMP! he's like John McClane for the new millennium or something. Don't mess with Jack. I've seen every episode of 24... probably twice. greatest show ever made. We named our dog "Jack Bauer". I'm a 24 addict.

Needless to say I've been having withdrawals since 24 took a year off due to the writer's strike. I had to go back and watch some of the old DVDs to get my "Jack fix". Obviously I'm stoked about the NEW season that starts in January & YEAH I'm stoked about the 2 hour "prequel" in November. And yeah, I was freaking out when I saw the trailer like 6 months ago that showed who the bad guy was gonna be! = Tony freaking Almeida!!! are you kidding me!?!? Jack's best friend that got blown up with his wife the 1st episode of season 5 & then died in Jack's arms later that season.
Now for the whole point of this ADD riddled blog = WHOAAA!!! did you see the sneak peak/preview for this season (7) after the premier encore of Fringe Sunday night? well, if you missed it, check it out below.

passions = 24/Jack Bauer AND Africa/Justice for
African kids!!! I don't know that I'll be able to contain myself.
I LOVED Tears of the Sun & Hotel Rwanda - 2 of my fav movies on my shelf. I can't watch them much though bkuz it makes me wanna move to Africa TODAY & do whatever I can. It makes me angry to see the injustice. & now "jack" is going to stop the injustice... I guess he's gonna fight GENOCIDE & against kids being taken to be brainwashed as soldiers in the awful wars of genocide. they even say Jack is gonna be a "missionary" in Cape Town.
Crystal wasn't so sure they should be combining something as "real" as genocide & injustice in Africa with the fictional Jack Bauer... & maybe she's right. I just really hope the writers did a great job & it opens peoples' eyes to the realities of what is happening in our world. & then i hope people DO SOMETHING ABOUT IT!
who knows... maybe by the end of the season I'll have got so jacked up I'll move there & rescue some orphans myself. it's gonna happen one day & I'd prefer it to be sooner rather than later... we'll see what God decides.
haha... who knew Jack Bauer & the passion God put in me could intersect?
Posted by patrick mitchell at 8:36 PM

I just ordered a sweet Jack Bauer for President shirt from www.PantherTees.com. They have a bunch of Jack Bauer stuff. They said not to tell anyone, but here is a 10% discount code, pts10 (it is case sensitive, so copy and paste it). Enjoy!