that's the big news... the big announcement. a new ride for me!

My beloved Caddy (that many know so well and that I wrote about earlier today HERE) has not been running for almost 3 weeks now. It has been in the shop. on a Sunday after load out @ Ridge it just wouldn't start. Rusty worked on it in the freezing cold for a really long time (i was ready to give up before him & he was the one doing stuff... i was just holding the hood up). but it just wouldn't start.

If you don't know about the Caddy, I threw a "blog party" for her & you can read all about it HERE, HERE, HERE, and HERE. you should go back and read those... pretty fun.
It will give you an idea of how sad i was when the Caddy broke down. but then...

the next week some great friends GAVE me their car! let that sink in for a sec... gave me... for free... their car. 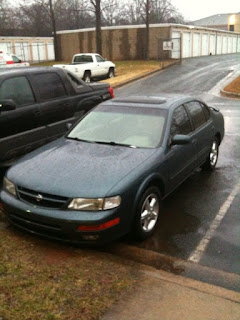 and this car is SWEET! it's a Nissan Maxima, which is P-I-M-P... but it's in AWESOME condition! the body looks new, the inside looks new... it's so cool. especially compared to the Caddy!

Depending on how you see things you make think this next statement is weird... but I have been praising God like crazy all week for providing this car from me!
He totally provided this car when i needed it through our friends who gave it to us!
(this is just a quick pic i snapped with my iPhone in the rain... doesn't do it justice. i'll put up more pics soon.)

it's kind of cool that this has been my prayer the past few months = "God, for Your Name's sake let my Caddy keep running past 300,000 miles. let me drive it another 10 years so that i can spend the $ that i would have to spend on a new car on Your Kingdom! Bless me by letting me drive this thing another 100K so that i can be a blessing!"

That's what I've been praying & I told Crystal this week that God totally answered my prayer, just not exactly what i was asking. He hooked me up with a car i can drive another 100K (at least), which was the essence of my prayer. He blessed me with not having to spend $ on a new car so i can be a blessing financially to others for God's Kingdom.

now, I can just do it in a phat Maxima!


(As for what will become of the beloved Caddy, stay tuned...)

Posted by patrick mitchell at 6:55 PM

bro! this is amazing!!